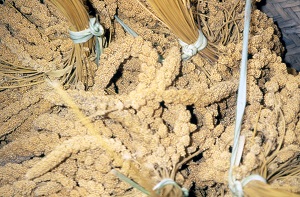 The Bunun tribe has developed five dialect communities in its history of migration:

Except for the Takopulan community which has been incorporated into the neighboring Tsou tribe in the 1930s, the remaining five communities form the basic components of the contemporary Bunun language. The Takbanuaz and Isbukun communities developed the earliest dialects during the division of the Bunun tribe, followed by the Takivatan and Takibakha communities which were split from Takbanuaz, and Takitudu which was split from Takibakha. The tribal communities started the division from the end of the 17th century and the beginning of the 18th century, and the migration to the different direction led to the formation of five main Bunun dialect groups in the 21st century. The Bunun language has withdrawn greatly from the use of uvulas and guttural and widely used dental consonants. The Bunun language used in the Isbukun community is now the dominant language and commonly used by the tribe in southern Taiwan. The dialects used by the Takbanuaz and Takivatan communities are popular in central Taiwan. The dialects used by the Takibakha and Takitudu communities are spoken in northern Taiwan.