The Yushan massif rises due to the collision of the Eurasian Plate and the Philippine Sea Plate. The main ribs are slightly shaped in a cross. The north-south direction is elongated, the east-west direction is short, and the center of the cross is the main peak of Mt. Jade. Yushan National Park is named after the mountain, which is located in the central area of Taiwan. It stretches over four administrative regions, Hualien, Kaohsiung, Nantou, and Chiayi. The terrain is roughly divided into three areas: Dongpu massif, Yushan massif, and Central massif. It is also an important catchment for the upstream areas of Jhuoshuei River, Gaoping River, and Xiuguluan River. The park covers an area of 103,121.4 hectares and is a typical subtropical alpine national park. There are numerous marvelous peaks with the natural formation of majestic rocks. It is one of the areas in Taiwan where high mountains preserve the original look. The main peak of Mt. Jade, standing 3,952 meters above sea level, is the storied number one peak in Northeast Asia. The vegetation varies as the altitude changes, from subtropical, temperate to cold zones, and there are various types of forests with rich wildlife breeds. The park occupies just about 3% of the area of Taiwan but has 2,055 species of flowering plants (475 monocots and 1,580 dicots), 27 species of gymnosperms, 433 species of ferns, 230 species of mosses and more than half of the native species in Taiwan, as well as 147 kinds of fungi. 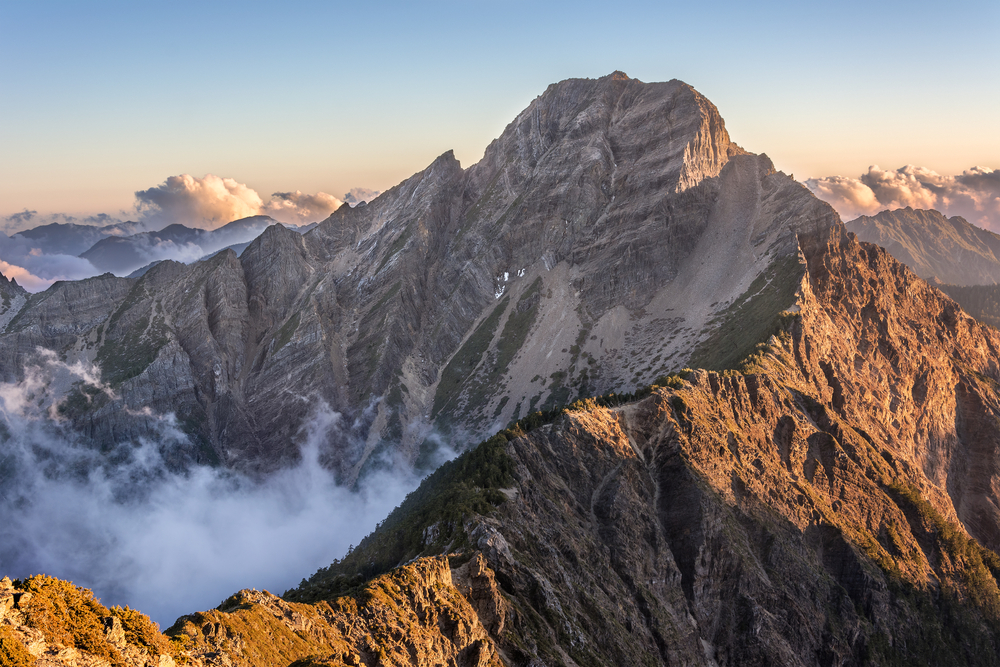 The survey results accumulated over the years show that there are currently 65 species of mammals in the park, and most of them are animals considered as part of the wildlife conservation by the Council of Agriculture of the Executive Yuan, such as Formosan serow, Formosan sambar deer, and Formosan black bear. There are also 233 species of birds, including almost all of Taiwan's residents' birds, such as the Mikado pheasant, Swinhoe's pheasant, Formosan barwing, Steere’s liocichla, and Taiwan Yuhina, and 29 species are endemic to Taiwan. According to the survey of the mountain streams, there are 16 species of freshwater fish. There are also 1,574 species of insects (285 species of butterflies, accounting for more than half of all butterfly species in Taiwan). There are 46 species of reptiles in the park, with the Alishan turtle-designed snake, Sauter’s ground snake, and tree lizard accounting for most of the population. There are 21 species of amphibians, and among them, the Formosan salamander and Sonani’s salamander are remnants fauna of the Ice Age located in the subtropical Taiwan that offer extremely high value of academic research.

With respect to cultural and historical sites, there are Batongguan Traversing Trail, an important milestone to signify the transition from passive resistance to active development, built during the Qing Dynasty, and Batongguan Traversing Road and Guanshan Traversing Road, built during the Japanese colonial period to govern the indigenous tribes. The park in the past had been the area where the Tsou tribal and the Bunun tribal people lived. The historic trails still have many old community sites left by the Bunun tribe, and the relics tell the many heart-touching stories of the Bunun people's rebellion against the Japanese government.

Yushan National Park has rich cultural and natural resources, and its scenery changes over four seasons offer a variety of values and purposes for sightseeing and leisure trips, academic research, and environmental education. The has actively promoted eco-tourism and mountain education in recent years, and Yushan National Park can be an important venue used for facilitating these events. Especially in today's world, the convenience brought by roads allows people to easily reach the mountain areas inaccessible in the past and experience and feel the different atmospheres of four seasons in the park. The precious treasure from nature should be valuable assets for all people. The park is now a place for people to get close to nature and take a break away from the hustle and bustle of city life, and also the most beautiful land and paradise we leave to future generations.