Many Bunun seniors have a hometown in their hearts, and the five known hometowns are Takbanuaz, Takibakha, Takitudu, Takivatan and Isbukun. The five old communities in today's Nantou County are mostly named after the founding ancestors of the Bunun tribe. Because of their memory of their founding ancestors, the anthropologists during the Japanese colonial period were able to identify the five main communities and the one, Tapukul, which has ceased to exist to date, with a population of almost 20,000, who at the time scattered in the vast mountain areas on both sides of the Central Mountain Range. According to legend, the ancestors of the Bunun tribe had once in the western plains before moving into the territory of Nantou to establish the first mountain tribe, Takbanuaz. The population outflow created Takibakha to the north. The ancestors of Takitudu branched out from Takibakha and expanded north, where they came into contact with the Atayal tribal people, and the place was the northernmost boundary of the Bunun tribal distribution. In Sinabalan of Xinyi Township in Nantou County, the Isbukun legend has it that although the community originated from the western plains, the Bunun people never thought that they came from the Takbanuaz community, but believed that the Tapukul community, which at the time had been mixed with the bloodline of the Tsou tribal people and nearly extinct, was a branch of the Bunun tribe. Legend has it that the ancestors of the Bunun tribe had stayed in the communities of Takibakha and Takitudu before moving south to the south of Takbanuaz to establish Isbukun due to drought. 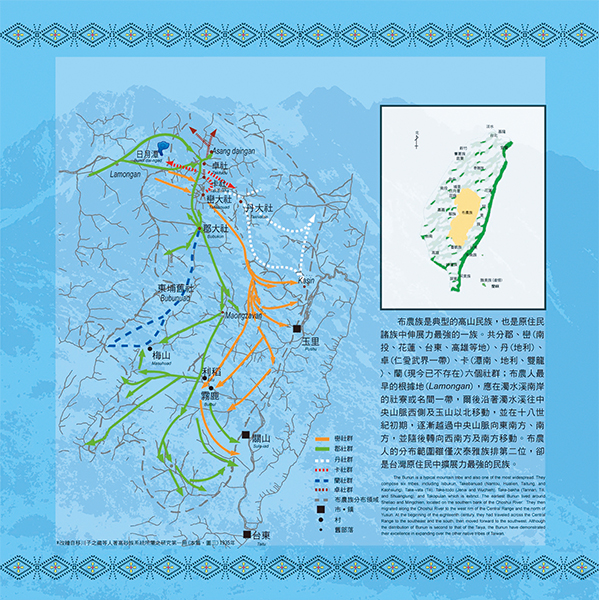 With Isbukun to the south, Takibakha, and Takitudu to the north, those who remained in Takbanuaz had to travel east to create their own new world, which resulted in the establishment of the Takivatan community. The Bunun tribal people living in Laidazuan of Xinyi Township in Nantou County are typical alpine indigenous people. In the past, they lived in the areas at an elevation between 500 and 3,000 meters. About half of them are in the mountain areas at an elevation between 1,000 and 1,500 meters. Among all indigenous tribes, they inhabit the highest elevation and are the most adaptive to mountain life. The traditional Bunun tribes are mostly distributed halfway up the mountain or on mountain slopes. They mostly come from the same clan, so the distribution is vast and scattered. During the Japanese colonial period, the Bunun people were forced to relocate for better management. In the present day, Bunun tribes are in Xinyi and Ren-ai Township of Nantou County, Wanrong Township and Zhuoxi Township of Hualien County, Yanping and Haiduan Township of Taitung County and Namaxia, Taoyuan and Maolin District of Kaohsiung City, a total of nine regions in four counties or cities.